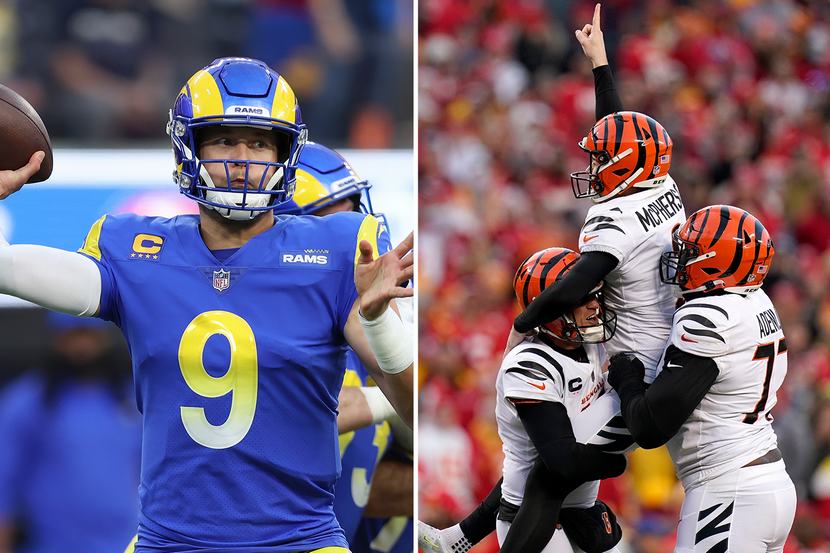 The matchup for Super Bowl 56 didn’t go according to script. The Bengals, AFC No. 4 seed, will be playing vs. the Rams, the NFC No. 4 seed. Cincinnati will be traveling to Los Angeles and SoFi Stadium the game, but it is designated the home team.

The Rams are the slight favorites as unofficial hosts. Bengals coach Zac Taylor is a protege of counterpart Sean McVay. Quarterbacks Joe Burrow and Matthew Stafford will each be trying to become the first QB wearing a No. 9 jersey to win a ring since Drew Brees.

After an amazing series of playoff games through conference championship weekend, there should be every expectation the Super Bowl will thrilling and therefore difficult to call. But Sporting News has been making a fearless forecast of professional pigskin prognostications, so why stop for the biggest game of them all?

Here’s how SN sees Super Bowl 56 playing out from both sides:

The Bengals, despite Burrow being the first QB to lead the league in times sacked to get to the Super Bowl, have a dangerous and diverse offense. Burrow does a great job to buy time and extend plays with his feet. Taylor and offensive coordinator Brian Callahan haven’t been afraid to let Burrow loose looking for big pass plays even with the sack risk. They also have proved they can pivot well and be a strong power running team with Joe Mixon when needed. Burrow uses good matchups both inside and outside to his full advantage.

Cincinnati’s offensive line had its best game of the playoffs in Kansas City. Burrow did make a few great escapes, but he was sacked only once and the team rushed for 118 yards despite trailing by double digits in the second half.

The massive concern vs. the Rams will be 3-4 defensive end Aaron Donald disrupting the game plan inside. With the focus on his dominance, he’s also getting good help up front from nose tackle Greg Gaines and Super Bowl 50 MVP edge rusher Von Miller. Burrow needs to be quick in getting the ball out of his hands and avoiding Jalen Ramsey in coverage as much as possible. There should be the sense that Ramsey will be mostly covering dynamic rookie wide receiver Ja’Marr Chase, the center of the attention for every secondary opposing the Bengals. But Burrow proved against the Chiefs he’s fine treating Tee Higgins as a co-No. 1. He also has Tyler Boyd, his backs and tight ends for shorter routes.

Burying Burrow is difficult. He’s cool and tough in the pocket and throws well on the move. He can get hit and keep popping up to make money throws in clutch situations. Having the explosive balance from Mixon also helps. The Rams will have their moments, but the Bengals will have more.

The Rams’ centerpiece is wide receiver Cooper Kupp. Everything else flows from his uncanny connection with Stafford. He has proved he is matchup proof with the way he can dominate running after the catch inside on shorter routes all the way through stretching the field outside with his size and vertical speed. The Bengals, like with the Chiefs’ Tyreek Hill and Travis Kelce, will be more about playing containment with him and Odell Beckham Jr. Bending and not breaking will be key, as the blitzes will be calculated so Kupp can’t go into maximum burn mode.

Los Angeles can run the ball well with whoever’s in the backfield. The offensive line has looked better in run blocking than in pass protection of late. The Bengals will try to get pressure again with only the front four, led by relentless defensive ends Trey Hendrickson and Sam Hubbard. At defensive tackle D.J. Reader is also a big-time run stopper and B.J Hill had major impact vs. the Chiefs. The Bengals aren’t as strong as Ramsey’s Rams at cornerback, but they have more active safeties and linebackers.

That said, McVay and Stafford will find matchups and plays they like often, much like the Chiefs did for at least half of the AFC championship game. The Bengals just want to contain here to give Burrow a chance to match Stafford.

Burrow’s young “It” factor comes into play first vs. Stafford’s experience in execution. The Bengals have had their share of unsung heroes with an impact defense by committee and receivers such as Boyd and Samaje Perine boosting the offense. The Rams have found extra juice in their passing game with young wide receiver Van Jefferson and tight end Kendall Blanton. Taylor will have more knowledge of McVay’s play-calling tendencies vs. the other way around given how much input Taylor gets from Callahan on scheming.

The Rams have a reliable punter-kicker combination in Johnny Hekker and Matt Gay. So do the Bengals in veteran Kevin Huber and rookie Evan McPherson. The Rams have Brandon Powell for punt returns and the Bengals have like Chris Evans on kickoff returns. McPherson, however, is a big reason why Cincinnati is in this position with his perfect playoffs, also showing great range with nerves of steel. With no weather concerns, McPherson should be money when it counts most again.

Taylor once served as McVay’s quarterbacks coach. He, Callahan and Bengals defensive coordinator Lou Anarumo are upstarts in the playoffs. McVay, who took a different staff to Super Bowl 53 against the Patriots, including Taylor and Wade Phillips, has gotten great help from offensive coordinator Kevin O’Connell and defensive coordinator Raheem Morris, two men seasoned well from other organizations.

The home-field advantage in Los Angeles doesn’t exist for the Rams, no matter how much the league and the team would make you believe. This is also not the typical game at SoFi Stadium as it will lean more to neutral site at best. The Bengals’ fans are by far the more impassioned and playing for “Who Dey” Nation will continue to lift the spirits of their team, which has been playing with house money all season.

Cincinnati seems to be operating with less pressure on it as a rising young team with Burrow, while L.A. is stockpiled with “all-in” veterans from other teams around Donald and Kupp. The Bengals are a smart young team with Burrow and also won’t beat themselves witih bad penalties or turnovers. Burrow’s championship pedigree and demeanor counts volumes after knocking off Mahomes in pursuit of being on the level of Mahomes.

Buychampionrings has a full collection of super bowl championship rings for sale, check out their store.

Although it would a nice story for Stafford to win a Super Bowl right after his 34th birthday in his first season with the Rams after all those fruitless years with the Lions, the NFL is a league tilting toward the AFC’s young guns with the sun setting for the GOAT now in the NFC, Tom Brady. Mahomes has a ring. Josh Allen and Justin Herbert might get into the mix very soon. Burrow, only two years removed from his Heisman and national title turn at LSU, has the old-school cool swagger tied to Super Bowl Joes of the past (Namath, Montana). At 25, he looks like he’s been in the league for a long time. The Rams have a solid defense, but they have enough holes to exploit for Burrow to outduel Stafford, setting up McPherson for the game-winner late (again).