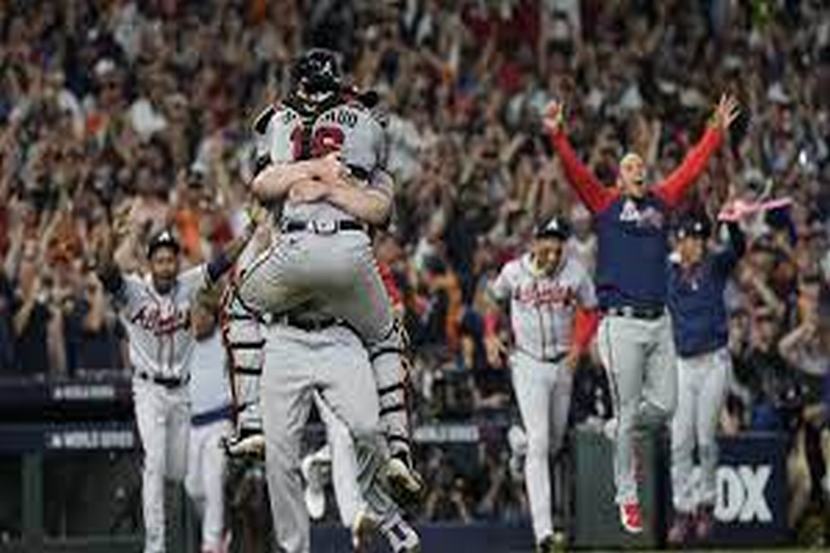 Atlanta did it. When Yuli Gurriel rolled over to Dansby Swanson for the 27th and final out on Tuesday night, the Braves became World Series champs. It ended a 26-year drought and gave the franchise its fourth title. But while the 26 players on the postseason roster got to pose with the trophy, don the special shirts and spray champagne in the clubhouse, they’re far from the only ones to be a part of the amazing journey the team went on.

Fifty-six players were lucky enough to put on a Braves uniform this season, which makes them World Series champions, no matter how small or nebulous their role was along the way.

Here are eight of the biggest and strangest names you may have forgotten played a part in the six-month march to the title.

Long before the Braves got over the .500 mark or took the NL East lead, it seemed that the former Giants legend and now four-time World Series winner was going to be the club’s secret weapon. Sandoval smashed three pinch-hit home runs by April 15 — putting him on pace to break the single-season pinch-hit home run record of seven. He added a fourth in May, but that would be it before he was traded to Cleveland in July for postseason hero Eddie Rosario.

Still, Sandoval made his mark: While in Atlanta, the team celebrated big moments by dancing around in the dugout with a panda bear head. It’s just a shame that he wasn’t around in Houston for a reprise of this in Game 6:

While we can’t say for sure, Gore probably holds the record for most World Series rings per plate appearance. The legendary speedster has 77 career regular-season plate appearances — racking up 40 steals to boot — and just picked up his third World Series title. But when Gore won the championship with the 2015 Royals and 2020 Dodgers, he at least appeared in a regular-season game for them.

This year, Gore spent the entire regular season with the Braves’ Triple-A club in Gwinnett before getting called up for the NLDS against the Brewers. Kept on the postseason roster for all of October, he made his only Braves appearance in Game 2 of the Division Series.

Gore replaced Joc Pederson (who was pinch-hitting) on the basepaths in the bottom of the seventh, was there for all of two pitches — drawing a few pick-off throws along the way — before Jorge Soler flew out to end the inning. Gore was then lifted for Luke Jackson.

Look at Mathis’ offensive numbers and you may cringe. The veteran catcher has a career batting line of .194/.252/.299 — the eighth-worst career OPS for any player with at least 3,000 plate appearances since 1900. However, talk to his teammates or the pitchers who have thrown to him and there’s a reason he still cracked the Braves’ big league roster for nine at-bats in 2021: His defense and pitch-calling are just that good.

While Mathis was up for just three games after both Travis d’Arnaud and former Braves catcher Alex Jackson got hurt on the same day, he stayed on the taxi squad for the rest of the season. While there, he took BP, stayed in shape and worked with the pitchers in the bullpen — anything necessary to help the team.

“I was hitting, taking BP quite a bit,” Mathis told Fox Sports’ Jake Mintz. “I told [GM] Alex [Anthopoulos] from the beginning, ‘I know where I’m at. I know I’m here for an emergency, but I’ll continue to keep myself in shape and ready to go just in case.'”

Another Major League veteran who finally earned a ring. The Braves acquired Vogt in July from the D-backs after William Contreras was sent to Triple-A and d’Arnaud was still on the injured list. So, Vogt got into 26 ballgames from when he was acquired until his final game on Sept. 9. He went out on a high note, though: In his last game with Atlanta, he went 2-for-2 with two home runs — his only two dingers in an Atlanta uniform.

Buychampionrings has a full collection of world series championship rings for sale. Check out there store.

A good trivia question: Who was the catcher the Braves acquired in between Mathis and Vogt? The answer would be the former Gold Glover Lucroy, who appeared in two games for Atlanta before making way for Vogt.

Perhaps even stranger? Though Lucroy wasn’t on a postseason roster, he still appeared in the playoffs — with the Brewers. Lucroy threw out the first pitch before NLDS Game 2.

A fifth-round selection by the Padres in 2004, Kazmar made his big league debut four years later. In 19 games for San Diego that September, he knocked out eight hits in 39 at-bats while seeing action at shortstop and second base. Only 24 years old, he surely thought his big league days were just beginning.

Instead, it would take over 12 years — 12 years and 206 days, to be exact — before he made it back to The Show when the Braves called him up in April. Kazmar lasted three games and went 0-for-2. Probably the most glorious oh-fer in his life.

“That was probably one of the greatest moments I’ve had as a manager at all levels. Quite honestly, it’s amazing. I mean you go from ’08 to 2021 in between, you got to be kidding me,” Braves manager Brian Snitker said at the time. “The perseverance and the dedication and the drive, and the thing is I just was telling the guys that he’s getting better as a player. I mean he probably was the MVP of Spring Training for like the third year in a row. It’s the perfect guy right now for where we’re at.”

Drafted in 2015, Flaa made his big league debut in April with the Orioles. He pitched 1 1/3 scoreless innings against the Yankees, picking up his first big league strikeout, too. Just a few weeks later, the Braves snagged him off waivers and he made his lone appearance for Atlanta against the Mets. He pitched another 1 1/3 innings, though this one didn’t go so well: Flaa was charged with four earned runs as he gave up two home runs.

Flaa spent the rest of the year in the Minors, but hey, he still went from a last-place team to a World Series winner. Not a bad move.

Edwards helped end another World Series drought … but just barely. While Edwards was a key member of the Cubs bullpen in 2016, Edwards was a Braves player for all of one-third of an inning. Edwards entered to face the Phillies on May 7, gave up a double to Bryce Harper, threw a wild pitch and surrendered a home run to J.T. Realmuto before recording his first out. After handing out a walk and giving up a single, he was pulled from the game and his Braves career was over. A week later, he was on the Blue Jays.