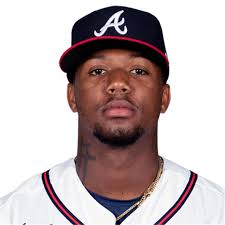 Was also the NL stolen base leader and won a Silver Slugger Award.

Acuna Jr was promoted to the major league in the 2018. This made him the youngest player in Major League Baseball at that time. Claiming the distinction from Ozzie Albies.

Though Acuna Jr wore uniform number 24 throughout his career in honor of Miguel Cabrera, he made his debut on April 25, 2018 wearing number 13.

Above all, Acuna collected his first career hit off Kevin Shackelford against the Cincinnati Reds.

The next day, also against the Reds, Acuna Jr hit his first MLB home run off Homer Bailey. He finished the game 3 for 4 as the Atlanta Braves won 7–4.

The Atlanta Braves signed an eight years contract worth 100 million with Acuna Jr. The extension included the team options for the 2027 and 2028 seasons.

At midseason, he was named a starting outfielder for the National League in the 2019 Major League Baseball All-Star Game and invited to take part in that year’s Home Run Derby.

However, Acuna Jr missed the 40–40 club by three stolen bases. He led the major leagues in power-speed number (38.9).

During a season shortened by the COVID-19 pandemic, the Atlanta Braves won the division for the third time in a row, earning a league-record 20th division title.

Near the end of the season, Acuna Jr hit a 495-foot home run against the Boston Red Sox; it was the longest MLB home run that year and the longest home run ever hit at Truist Park.

He was awarded his second consecutive Silver Slugger Award and finished in twelfth place in voting for the Most Valuable Player Award.

Next, on May 19, Acuna hit his first career walk-off home run against the New York Mets to give the Braves a 5–4 win.

While on July 10, 2021, Acuna suffered a leg injury while trying to field a fly ball and was taken off the field on a motorized stretcher.

An MRI showed a complete tear in his right anterior cruciate ligament, which prematurely ended his 2021 season.

While in 2021, he had the fastest sprint speed of all major league right fielders, at 29.4 feet/second.

He led the major leagues with 72 runs scored at the time of his injury.

Acuna Jr was elected to start the 2021 All-Star Game alongside teammates Freddie Freeman and Ozzie Albies but was unable to participate due to the injury.

Despite Acuna’s injury, the Atlanta Braves went on to win the 2021 World Series ring against the Houston Astros.