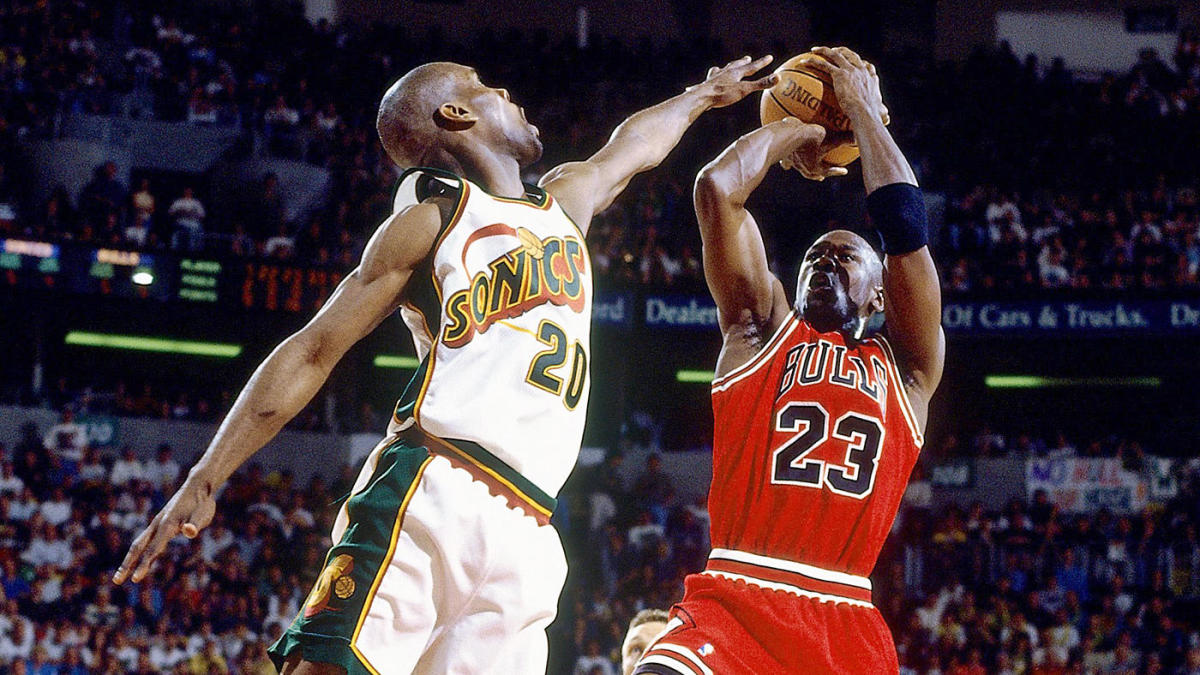 Jordan led the Bulls to six championships in as many Finals appearances over an eight-year span. The six titles has the Bulls tied in third for the most NBA championships ever behind the Boston Celtics (17) and the Los Angeles Lakers (16).

While he did record remarkable numbers for a player closer to 40 than 35, he was clearly in the twilight of his career with the WIzards. His greatest years came with the Bulls, predominantly in the 1990s when he led the franchise to six championships in as many Finals appearances over eight years.

Here’s a look at when Jordan won each of his six NBA titles, the numbers he put up in those seasons and the teams he beat en route to those championships:

Road to the 1991 NBA Championship:

The most iconic moment of this championship series came in Game 2 when Jordan pulled ‘the spectacular move’ by switching from a dunk to a left-handed layup mid-air:

Road to the 1992 NBA Championship:

Averaging 30.1 points (1st in NBA), 6.4 rebounds, 6.1 assists, and 2.3 steals, Jordan led the Bulls to a league-best 67-15 record. It was the first time in franchise history that the Bulls had recorded the league’s best regular-season record.

In the playoffs, this time around, the Bulls faced a lot more competition. Dropping seven games in the 1992 postseason, Jordan led the Bulls with playoff averages of 34.5 points, 6.2 rebounds, 5.8 assists, and 2.0 steals. With this title, the Bulls, at that time, became only the third franchise after the Lakers and the Celtics to win back-to-back championships.

Road to the 1993 NBA Championship:

In the quest to become only the second franchise since the Celtics of the 1960s to win three straight titles, Jordan averaged a playoff career-high 35.1 points to go along with 6.7 rebounds, 6.0 assists, and 2.1 steals.

During the 1993 postseason, he recorded two 50-point games including a 55-point masterpiece in Game 4 of the Finals:

Road to the 1996 NBA Championship:

In the postseason, Jordan averaged 30.7 points, 4.9 rebounds, 4.1 assists, and 1.8 steals as the Bulls dropped just one game en route to the Finals. In the championship series, they quickly jumped to a 3-0 lead against Gary Payton and SuperSonics. While Sonics retaliated and won two straight, Jordan and the Bulls iced it in Game 6.

Road to the 1997 NBA Championship:

Just like the regular season, the Bulls breezed past the East in the playoffs and were set to face the Utah Jazz in the NBA Finals. In the extremely competitive series, that saw an average winning margin of just six points, the defending champions came out on top.

Battling the Flu, Jordan finished with 38 points, seven rebounds, five assists, and three steals in 44 minutes on the court.

Road to the 1998 NBA Championship:

Coming off 72 and 69 wins in the previous two years, the Bulls kept the momentum rolling. They tied the Utah Jazz for the league’s best record of 62-20 as Jordan averaged 28.7 points, 5.8 rebounds, and 3.5 assists while playing all 82 games.

The Bulls cruised past the first two rounds but in the Conference Finals, just for the second time in the Bulls championship seasons, they were taken to a Game 7 by the Indiana Pacers. After narrowly beating them, they were set for a rematch with the Jazz but this contest ended in six games as well.

Jordan ended his Bulls career with one of the best sequences of his career – a steal on Malone followed by the game-winner over Byron Russell.

Flash Back on some of the career highlights of Michael Jordan,

Heres some close up looks on Michale Jordan’s Championship Rings,