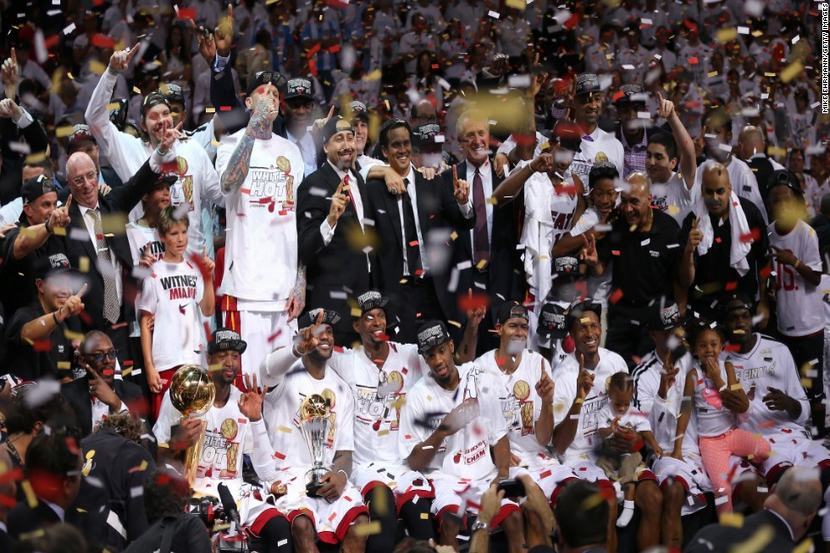 Miami Miami Heat, American professional basketball team based in Miami that plays in the Eastern Conference of the National Basketball Association (NBA). The Miami Heat have won three NBA championships (2006, 2012, and 2013).

The Miami Heat, along with the Charlotte Hornets, entered the league in 1988 as an expansion team. Miami won just 15 games in its first season but improved on its record in each of the next three seasons, culminating in a play-off berth (albeit with only a 38–44 regular-season mark) in 1991–92. The Miami Heat were swept by the eventual-champion Chicago Bulls in the first round of the postseason and returned to the play-offs in 1993–94, only to again lose (to the Atlanta Hawks) in the first postseason series.

In 1995 future Hall of Fame head coach Pat Riley took charge of the Miami Heat. In just his second season with Miami, Riley guided a team featuring All-Stars Alonzo Mourning and Tim Hardaway to a surprising 61–21 record and a division title. In the 1996–97 postseason the Miami Heat defeated the Orlando Magic and the New York Knicks in the first two rounds of postseason play, with the series against the Knicks including a notorious bench-clearing brawl in game five that marked the beginning of a fierce rivalry between the two franchises. The Miami Heat’s play-off run in 1997 ended in the Eastern Conference finals, where the team lost to the Chicago Bulls.

Miami won three consecutive division championships beginning in the 1997–98 season. However, the Miami Heat were eliminated by the Knicks in each of those respective postseasons, which included a stunning upset in 1999, when Miami became the second team in NBA history to lose its first-round series as a conference’s top seed in the play-offs. Miami’s six-year play-off streak ended in 2001–02, and, after the team limped to a last-place divisional finish in 2002–03, Riley stepped down as head coach to focus on his duties in the Miami Heat’s front office.

After drafting guard Dwyane Dwayne Wade in 2003, the Miami Heat returned to the play-offs the next season. With the acquisition of centre Shaquille O’Neal in 2004, the Miami Heat won 59 games and a division title in the 2004–05 regular season and followed by sweeping the New Jersey Nets and Washington Wizards in the play-offs before losing to the Detroit Pistons in the Eastern Conference finals. Riley returned as head coach 22 games into the 2005–06 season, and Miami defeated the Pistons in a conference finals rematch before dispatching the Dallas Mavericks in six games to win the Miami Heat’s first NBA championship. Emerging superstar Dwayne Wade led the Miami Heat to a number of winning seasons since 2006, but Miami did not advance past the first round of the play-offs in any of those years.

Buychampionrings has a wide collection of championship rings for sale. Check out their store.

The franchise’s fortunes went on another upswing after the 2009–10 season when free-agent Dwayne Wade agreed to a long-term deal with the Miami Heat and was joined by fellow superstar LeBron LeBron James and All-Star power forward Chris Bosh. The star-studded Miami Heat were the focus of a great deal of media attention during the 2010–11 campaign. After an uneven start to the regular season, the team charged through the play-offs, losing a total of just three games en route to the NBA finals, where Miami lost its rematch with the Dallas Mavericks. In 2011–12 the Miami Heat returned to the NBA finals, where it defeated the Oklahoma City Thunder. The following season the team registered the second longest winning streak in NBA history (27 games) and won a franchise-record 66 games en route to a third straight NBA finals appearance, where the Miami Heat defeated the San Antonio Spurs in a dramatic seven-game series. The Miami Heat won a fourth straight division title in 2013–14, which was followed by another quick run through the conference play-offs to set up a rematch with the Spurs in the NBA finals, the Miami Heat becoming the first team in 27 years to make four consecutive finals appearances. However, the Miami Heat lost its second finals matchup with the San Antonio Spurs, in five games.

All three of the team’s big stars opted out of their contracts during the following off-season to reassess their options and give the franchise (which was projected to be well over the league’s salary cap) more financial flexibility. Dwayne Wade and Bosh both re-signed with Miami, but LeBron James left the team to return home to the Cleveland Cavaliers, and the team failed to qualify for the play-offs in a weak Eastern Conference in 2014–15. The Miami Heat bounced back the following season, winning 48 games and earning a play-off bid, where the team was eliminated in the second round.