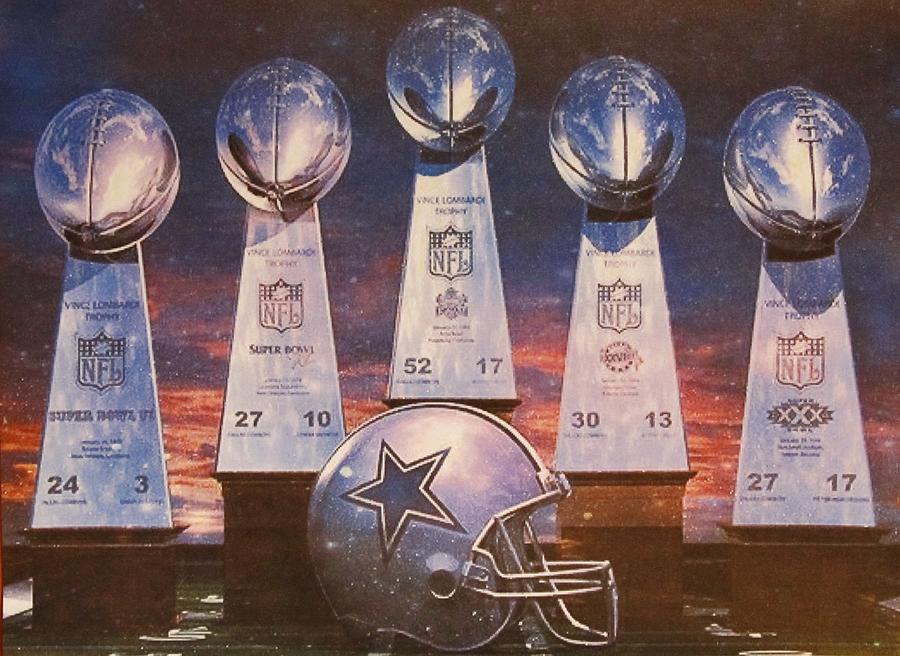 The Dallas Cowboys are a professional American football team based in the Dallas–Fort Worth metroplex. The Cowboys compete in the National Football League (NFL) as a member club of the league’s National Football Conference (NFC) East division. The team is headquartered in Frisco, Texas, and plays its home games at AT&T Stadium in Arlington, Texas, which opened for the 2009 season. The stadium took its current name prior to the 2013 season.

The Cowboys joined the NFL as an expansion team in 1960.The team’s national following might best be represented by its NFL record of consecutive sell-outs. The Cowboys’ streak of 190 consecutive sold-out regular and post-season games (home and away) began in 2002. The franchise has made it to the Super Bowl eight times, tied with the Pittsburgh Steelers and the Denver Broncos for second most Super Bowl appearances in history, just behind the New England Patriots record eleven Super Bowl appearances.

This has also corresponded to eight NFC championships, most in the NFC. The Cowboys have won five of those Super Bowl appearances, tying them with their NFC rivals, the San Francisco 49ers; both are second to Pittsburgh’s and New England’s record six Super Bowl championships. The Cowboys are the only NFL team to record 20 straight winning seasons (1966–85), in which they missed the playoffs only twice (1974 and 1984).

Buychampionrings carries a comprehensive collections of championship rings for sale.

Standard Series rings are our most affordable rings but they are still absolutely beautiful. They are made primarily of Zinc Alloy which allows for deep cut details, heavy weight and beautiful shine. The crystals give a brilliant shine to catch anyone’s eye when showing your pride.

Commemorate the Cowboy’s 70’s & 90’s Super Bowl championship with these rings. These are high quality silver & gold plated replica Super Bowl rings, made to look and feel like the real thing – “not real diamonds”. Perfect fit to be in one of your collection items or a great idea gift for any occasion.

The 1971 NFL season was the 52nd regular season of the National Football League. The season ended with Super Bowl VI when the Dallas Cowboys defeated the Miami Dolphins 24–3 at Tulane Stadium in New Orleans. The Pro Bowl took place on January 23, 1972, at the Los Angeles Memorial Coliseum; the NFC beat the AFC 26–13. Bringing home their 1971 Super Bowl Championship Ring.

The 1977 NFL season was the 58th regular season of the National Football League. The Seattle Seahawks were placed in the AFC West while the Tampa Bay Buccaneers were slotted into the NFC Central.

This was the last NFL regular season with 14 games. The regular season was expanded to 16 games in 1978, with the preseason reduced from six games to four. It was also the final season of the eight-team playoff field in the NFL, before going to ten the following season.

The 1977 season is considered the last season of the “Dead Ball Era” of professional football (1970 to 1977). The 17.2 average points scored per team per game was the lowest since 1942. For 1978, the league made significant changes to allow greater offensive production.

The season ended with Super Bowl XII when the Cowboys defeated the Denver Broncos.

The 1992 NFL season was the 73rd regular season of the National Football League. Due to the damage caused by Hurricane Andrew, the New England Patriots at Miami Dolphins game that was scheduled for September 6 at Joe Robbie Stadium was rescheduled to October 18. Both teams originally had that weekend off.

This marked the first time since the 1966 NFL season and the AFL seasons of 1966 and 1967 that there were byes in week 1; in those years, byes were necessary every week since there were an odd number of teams, which would happen again between 1999 and 2001. The Tampa Bay Buccaneers and Dolphins also had their 2017 season opener postponed due to Hurricane Irma.

The season ended with Super Bowl XXVII when the Dallas Cowboys defeated the Buffalo Bills 52–17 at the Rose Bowl. This would be the third of the Bills’ four consecutive Super Bowl losses; as of 2021, no team has ever lost three or four Super Bowls in a row (the earliest possible date that these figures could be matched would be either 2023 or 2024, and that would only happen if the Kansas City Chiefs–who lost Super Bowl LV in February 2020–lost in the Super Bowl for the next 2-3 seasons).

Buffalo would join the Miami Dolphins of the early 1970s as the only team to reach three straight Super Bowls and not until the New England Patriots of the late 2010s would another team reach three in a row.

The 1993 NFL season was the 74th regular season of the National Football League. It was the only season in league history where all NFL teams were scheduled to play their 16-game schedule over a span of 18 weeks (the league again played 16 games over 18 weeks in 2001, but this was not planned and instead was caused by the postponement of a week of games due to the September 11, 2001 terrorist attacks). After the success of expanding the regular season to a period of 17 weeks in 1990, the league hoped this new schedule would generate even more revenue. This was also done to avoid scheduling playoff games on January 1 and competing with college football bowl games. The NFL’s teams, however, felt that having two weeks off during the regular season was too disruptive for their weekly routines, and thus the regular season reverted to 17 weeks immediately after the season ended.

The 1995 NFL season was the 76th regular season of the National Football League. The league expanded to 30 teams with the addition of the Carolina Panthers and the Jacksonville Jaguars. The two expansion teams were slotted into the two remaining divisions that previously had only four teams (while the other four had five teams): the AFC Central (Jaguars) and the NFC West (Panthers).

Meanwhile, the two teams in Los Angeles relocated to other cities: the Rams transferred to St. Louis and the Raiders moved back to Oakland; this would be the start of a 20-year absence for the NFL in Los Angeles. During the course of the season it emerged that the Cleveland Browns would relocate to Baltimore for the 1996 season.

The Raiders’ move was not announced until after the schedule had been announced, which resulted in a problem in the third week of the season when both the Raiders and the San Francisco 49ers had games scheduled to air on NBC which ended up overlapping each other. The Raiders game was rescheduled for 10:00 AM PDT in case they were to relocate and NBC was given the doubleheader so that both Bay Area teams had their games televised locally.