Here’s all you need to know about Lebron James and his Championship Ring.

If you are a huge NBA fans, I believe you should know the answer. For those who aren’t a huge fan of NBA. You must be wondering how many NBA Championship Rings Does Lebron James Have.

How many rings does LeBron James have? LeBron has four rings. Two of his rings are from back to back championships that he won with the Miami Heat in 2012 and 2013. Lebron also has a ring from winning the NBA championship with the Cleveland Cavaliers in 2016. LeBron won his fourth ring with the Los Angeles Lakers in 2020.

NBA championship rings are like crown jewels, covered in diamonds and with unique detail for the team which won that seasons NBA Championship. They are designed and produced after the NBA Finals have been decided and presented to the team at the start of the folowing season. So they are highly personal to that team and that season. The most important aspect of the ring is the year in which the championship was won being inscribed upon the ring. We have looked at the rings which LeBron has won during his time in the NBA and explained the details of each ring. 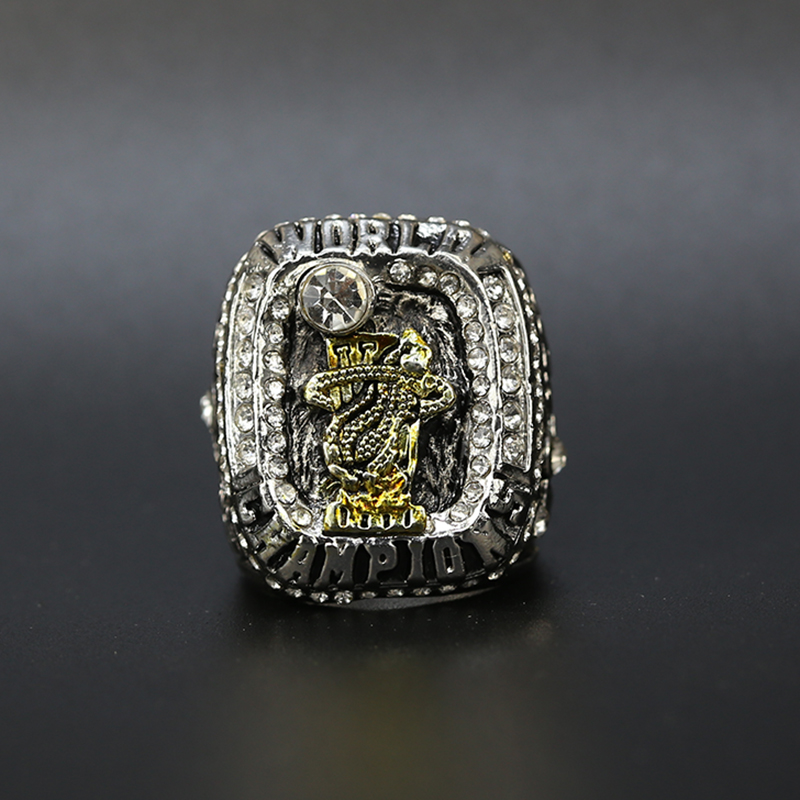 In 2010, Lebron moved to the Miami Heat to create a super team with Dwayne Wade and Chris Bosh. The Miami Heat won their first NBA Championship with the three players in 2012. In the Finals the “Heatles” came up against an Oklahoma City Thunder team that featured 3 future MVPs, (James Harden, Russel Westbrook and Kevin Durrant) and emerged victorious.

The ring which LeBron recieved in 2012 had the NBA Championship Trophy in the center of the ring, with the Miami Heat logo over the top of the ring. Words are inscribed on the top and bottom of the trophy with the words ‘World Champions’. To the left side of the ring LeBron’s name is inscribed with the year.

As mentioned NBA rings have diamonds encrusted upon them. LeBron’s Miami Heat ring from 2012 had 219 individual diamonds and three onyx stones. 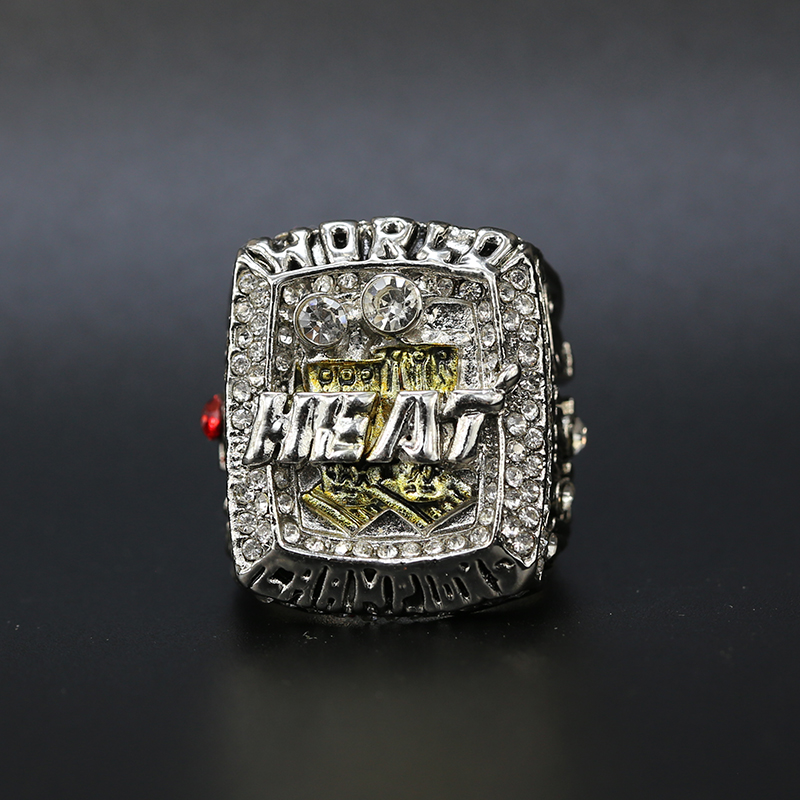 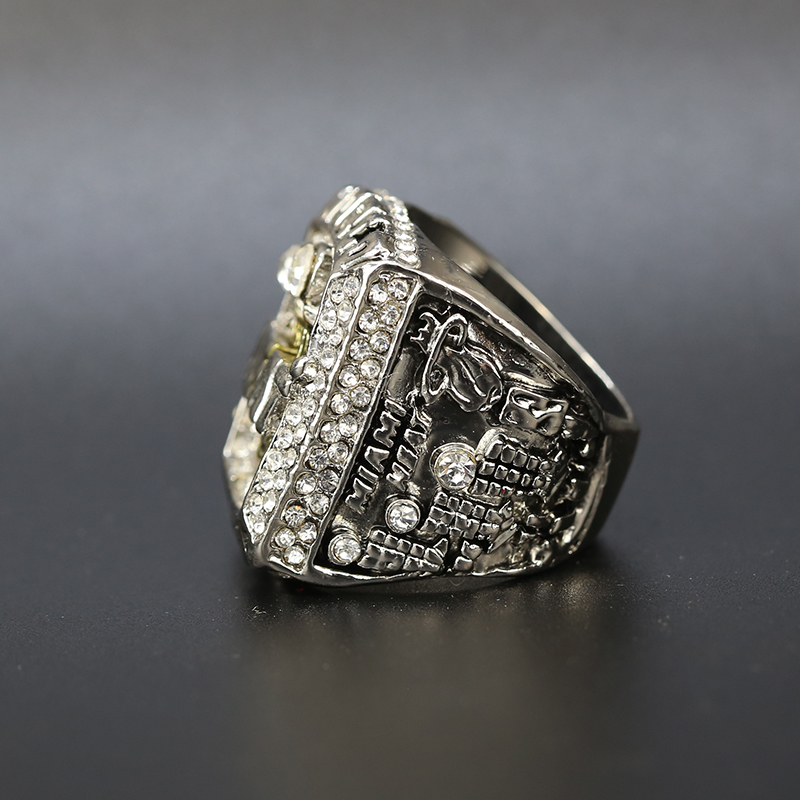 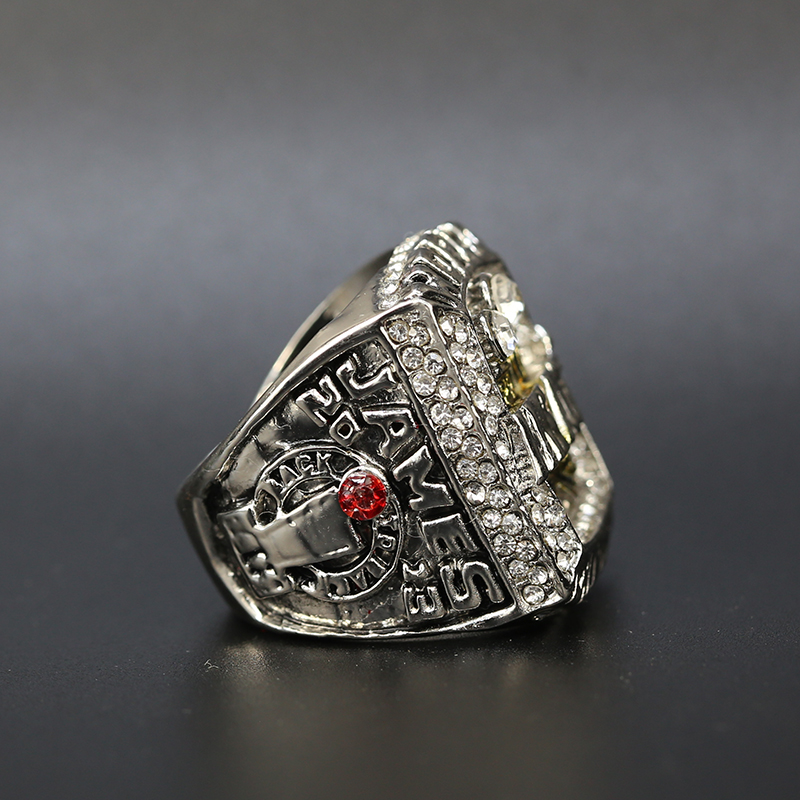 t was back to back championships for Dwayne Wade, Chris Bosh and LeBron James by beating the San Antonio Spurs in the NBA finals. 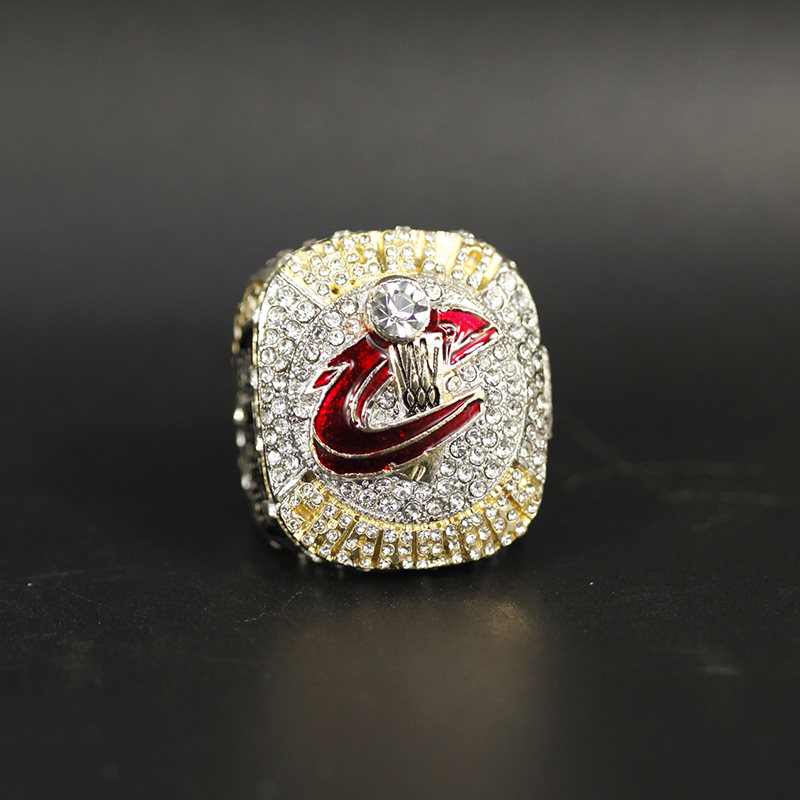 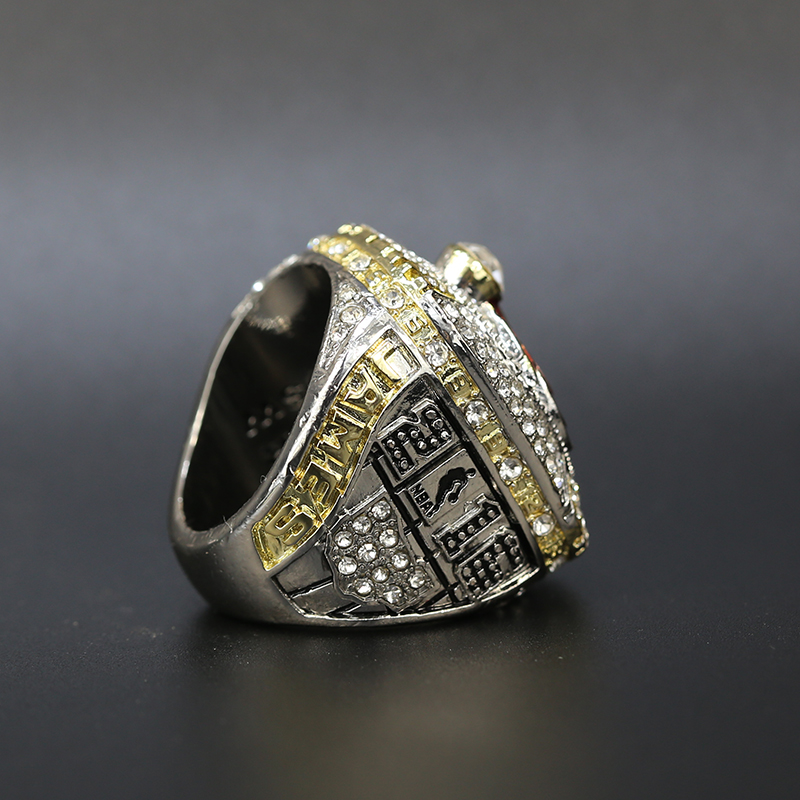 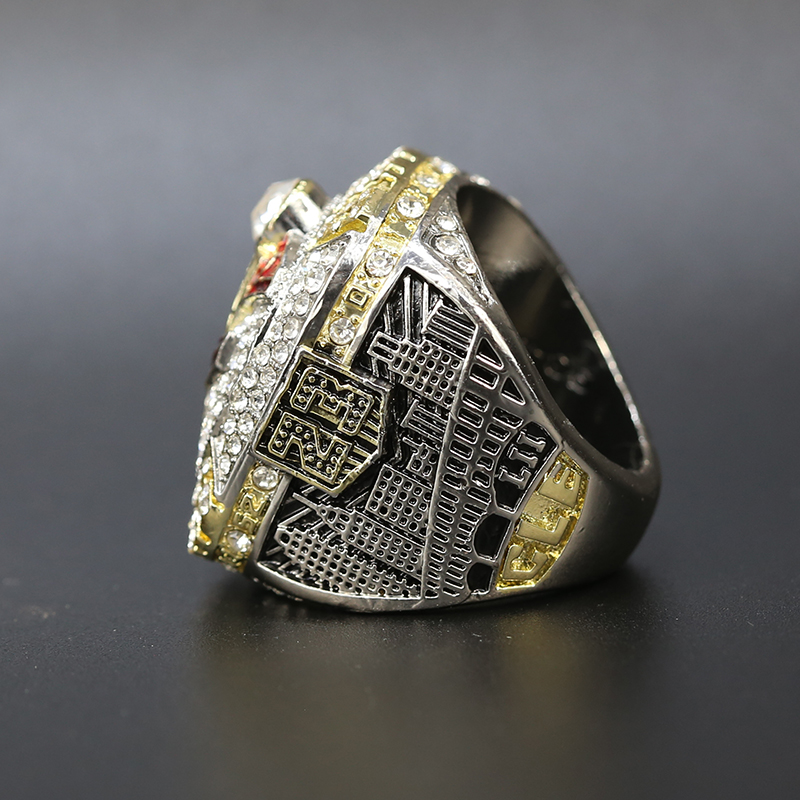 LeBron James left the Miami Heat and went back to Cleveland in 2014. LeBron desperately wanted to win a first championship for the city of Cleveland, he grew up less than 50miles away in Akron, Ohio. The Cavaliers made it to the NBA Finals however, it looked unlikely that they would win a NBA Championship, as they were 3-1 down in the NBA series against the Golden State Warriors – no team had ever come back from a 3-1 defecit in the Finals. Two of the Final 3 games would be played on the road in Oakland. LeBron and the team managed to force a Game 7, which was already one of the greatest come back stories in NBA history. With a minute and half left of Game 7, LeBron made ‘The Block’ on 2015 Finals MVP Andre Iguodala the boyant Oakland crowd fell silent. 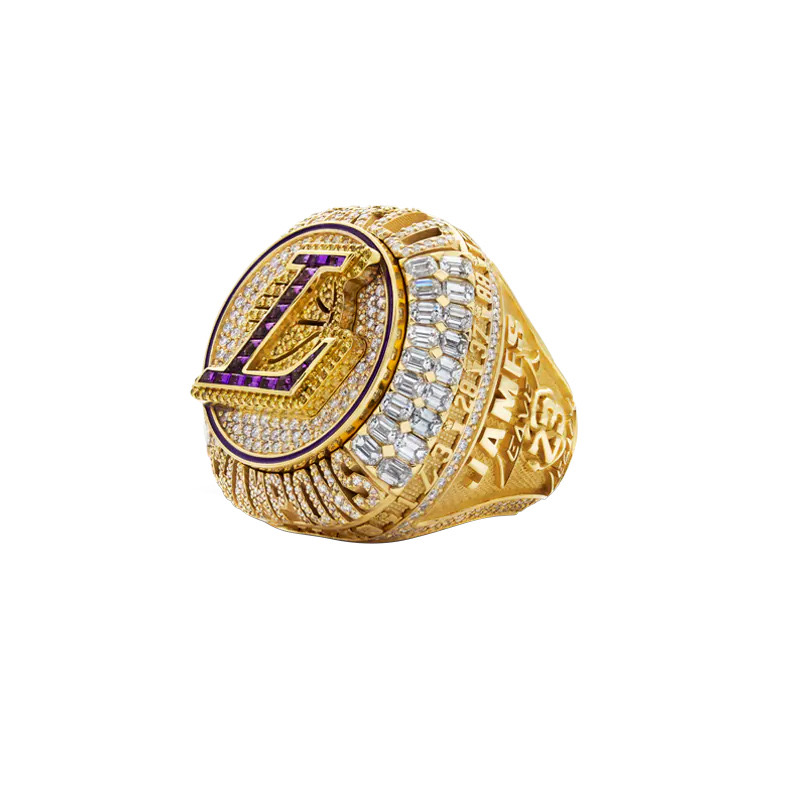 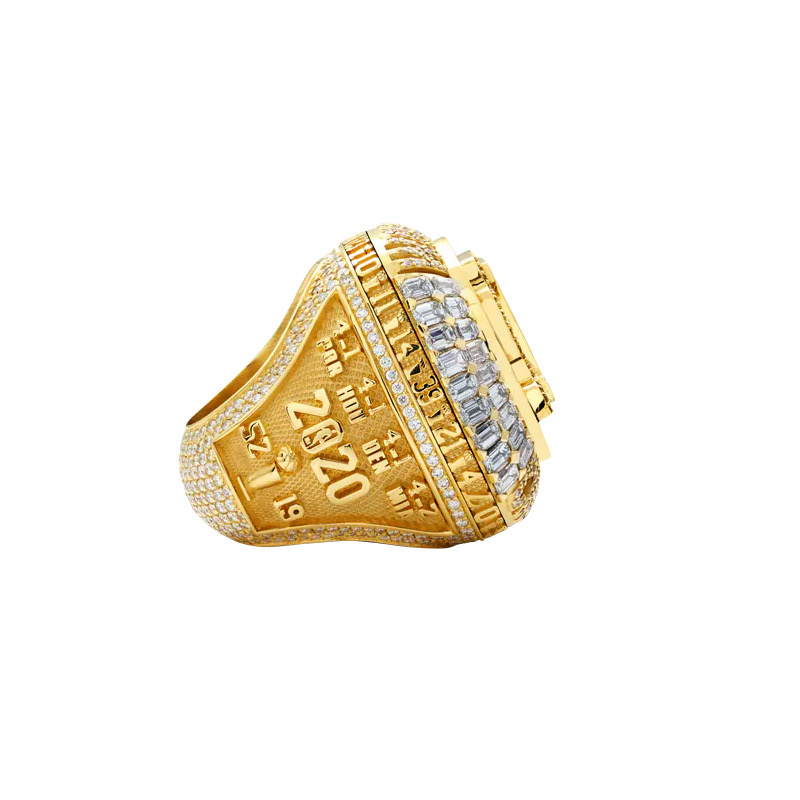 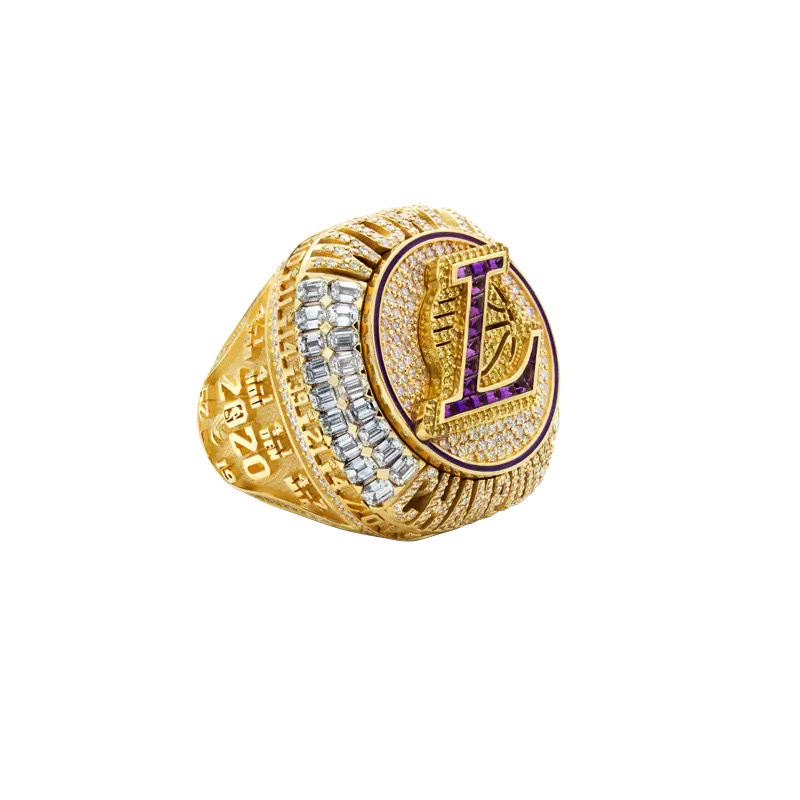 In an incredible ceremony ahead of their season opener on 20201  at Staples Center, the Los Angeles Lakers were given their NBA championship rings that were earned just over few  months ago when LeBron James and Anthony Davis led the team to the franchise’s 17th title, tied for the most in NBA history with the Boston Celtics.

In total, each of the championship rings weighs 16.45 carats and features 804 stones. There’s no symbolism in those numbers but taking into account the weight in gold and the carats of diamond, Arasheben confirmed that these rings are the most expensive in NBA history, eclipsing the ones given last year to the Toronto Raptors. However, when asked exactly how much they’re worth, Arasheben said he couldn’t put an exact dollar amount on it, instead opting to call them “priceless.”

Now, do you have a better idea of how many championship rings does Lebron James Have?

If you are interested  in some of the championship rings, please click into the link below and add them into your collections,