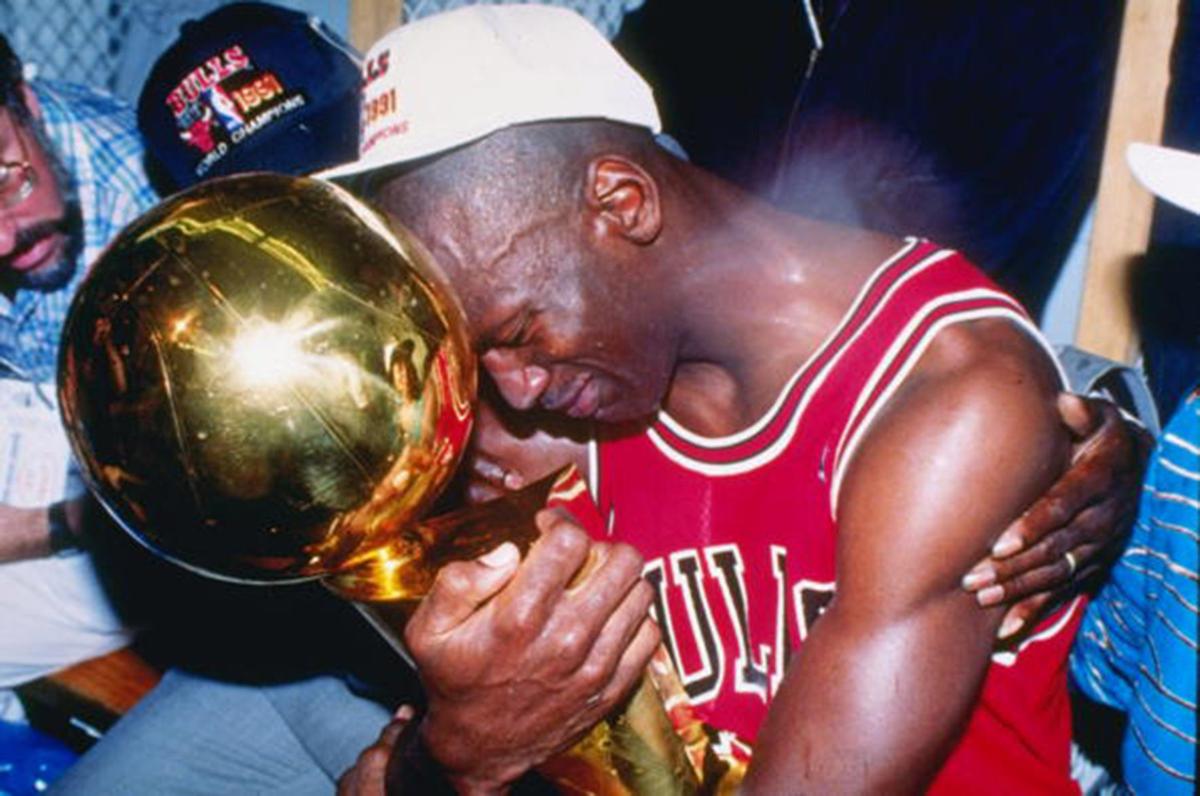 Jordan was the NBA Finals MVP in all six NBA championship runs.

Who did Jordan’s Bulls beat in the NBA Finals?

Chicago beat the Los Angeles Lakers — led by Magic Johnson — in five games. Jordan averaged 31.2 points per game, 11.4 assists and 6.6 rebounds in the series – which he highlighted with the iconic “switch hands” layup.

Chicago beat Portland in six games for its second NBA championship. Jordan scored 35 of his 39 points in Game 1 – which is best remembered for “The Shrug.” Jordan averaged 35.8 points, 6.5 assists and 4.8 rebounds for the series.

Phoenix had NBA MVP Charles Barkley, but the Bulls won the series in six games behind Jordan, who averaged 41 points, 8.5 rebounds and 6.3 assists for the series.

The Bulls won 72 games in the regular season, and they beat Seattle in six games for their fourth NBA championship. Jordan led Chicago with 27.3 points, 5.3 rebounds and 4.2 assists. The Bulls clinched the series on Father’s Day, which was especially meaningful for Jordan because it was first championship since his father James died

The Jazz had NBA MVP Karl Malone, but the Bulls won the series in six games behind Jordan, who averaged 32.3 points, seven rebounds and six assists. This series featured the famous “Flu Game” in Game 5 where Jordan scored 38 points despite battling flu-like symptoms.

Jordan led the final NBA championship run that is being chronicled in “The Last Dance.” Chicago beat Utah in six games, and Jordan closed the series in Game 6 with “The Shot” over Byron Russell. Jordan averaged 33.5 points, four rebounds and 2.3 assists in the series.

Video below is a full documentary of how Michael Jordan led the Chicago Bulls to becoming one of the most notable dynasties in sports history.

Jordan retired after the 1993 season and missed most of the next two seasons, and the Bulls reached the Eastern Conference semifinals each of those two seasons. Perhaps they make a deeper run with Jordan and face the Houston Rockets – who won back-to-back NBA championships in those two seasons.

Chicago was swept in the first round by Boston in 1986 and 1987, and those Celtics teams – led by Larry Bird – reached the NBA Finals.

Those are the teams that stood in the way the most against Jordan in the postseason.

What other championships did Jordan win?

Jordan’s success wasn’t limited to the NBA. He made the game-winning shot in the 1982 NCAA men’s basketball national championship game.

Jordan also won gold medals in the Olympics with Team USA basketball in 1984 and 1992.

Could Jordan have more titles?

Jordan and James both have lengthy statistical resumes, but that six-championship trump card gets played the most in the debate.

James had the Lakers at the top of the Western Conference before the season was suspended because of the outbreak of COVID-19. James turns 36 in December. Jordan retired from basketball for good when he was 40 years old after two seasons with the Washington Wizards.

Michael Jordan Championship Rings that you may be interested,