This Toronto Raptors NBA Championship ring was awarded to the Raptors players and staff after defeating the Golden State Warriors in the 2019 NBA Finals with Kawhi Leonard named the NBA Finals MVP.

Record breaking championship ring in any sport history with 14 Carat of diamonds in total of more than 650 diamonds. Made with 14k Yellow gold. Also being ranked for the largest NBA Championship ever made.

On the front of this Raptors Championship Ring, ir features the largest diamond in any professional sports with a massive 1.25 carat on the Larry O’Brien trophy. City of Toronto skyline was designed on the background with the iconic North Chevron Jersey.

Center of the ring has a work ‘North’ representing the King from the North.

Player side of the NBA Championship Ring Toronto Raptors 2019

Each player name is engraved on this side of the championship ring along with the jersey number. Kawhi Leonard on this ring.

Team side of the NBA Championship Ring Toronto Raptors 2019

This side of the ring features the championship year on a pave diamond background. 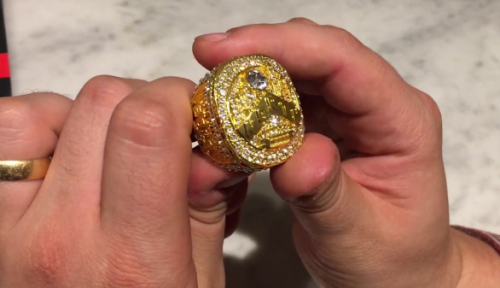 Edward Janczewski
Rated 5 out of 5
These guys are the best! Fast and professional! The ring was perfect.