The 1970 New York Knicks Ring was award to the New York Knicks after defeating the Los Angeles Lakers 4-3 in the NBA Finals. Each player in the term was awarded with this classic NBA Championship Ring.

Furthermore, Willis Reed was awarded the Finals Most Valuable Player.

Lastly, each ring is made of zinc alloy and weighs approximately 60 grams. A great collectible piece for all New York Knicks fans out there. 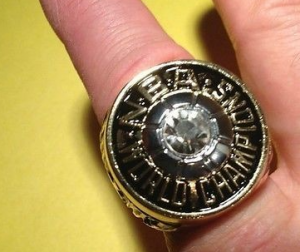