This Kevin Garnett 2008 Boston Celtics NBA Championship Ring was given to the Celtics after defeating the Los Angeles Lakers 4-2 in the NBA Finals. With Paul Pierce named the 2008 NBA Finals MVP.

Each of this 2008 Boston Celtics NBA Championship ring contains nearly 9 carats of diamonds and gemstones.

Front of the Championship Ring

On this face of the ring, it features custom shaped baguette emeralds creating the iconic Celtics Shamrock. With 64 pave set diamonds on the background creating an ultimate brilliance.

Player Side of the Championship Ring

This side of the ring features the player’s name, Kevin Garnett in this case. Along with the NBA trophy, celtics logo, NBA logo and the player’s jersey number.

Team side of the Championship Ring

Team side of side of the ring features these words ‘Banner 17’ which symbolize the 17th championship victory of the franchise. On the bottom of the band, it contains the word ‘Ubuntu’ which means I am, because we are, the teams mantra. 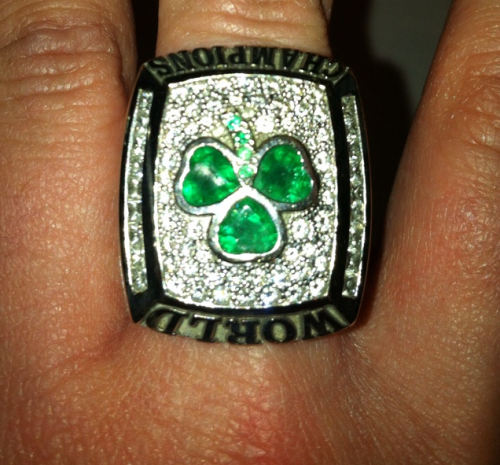