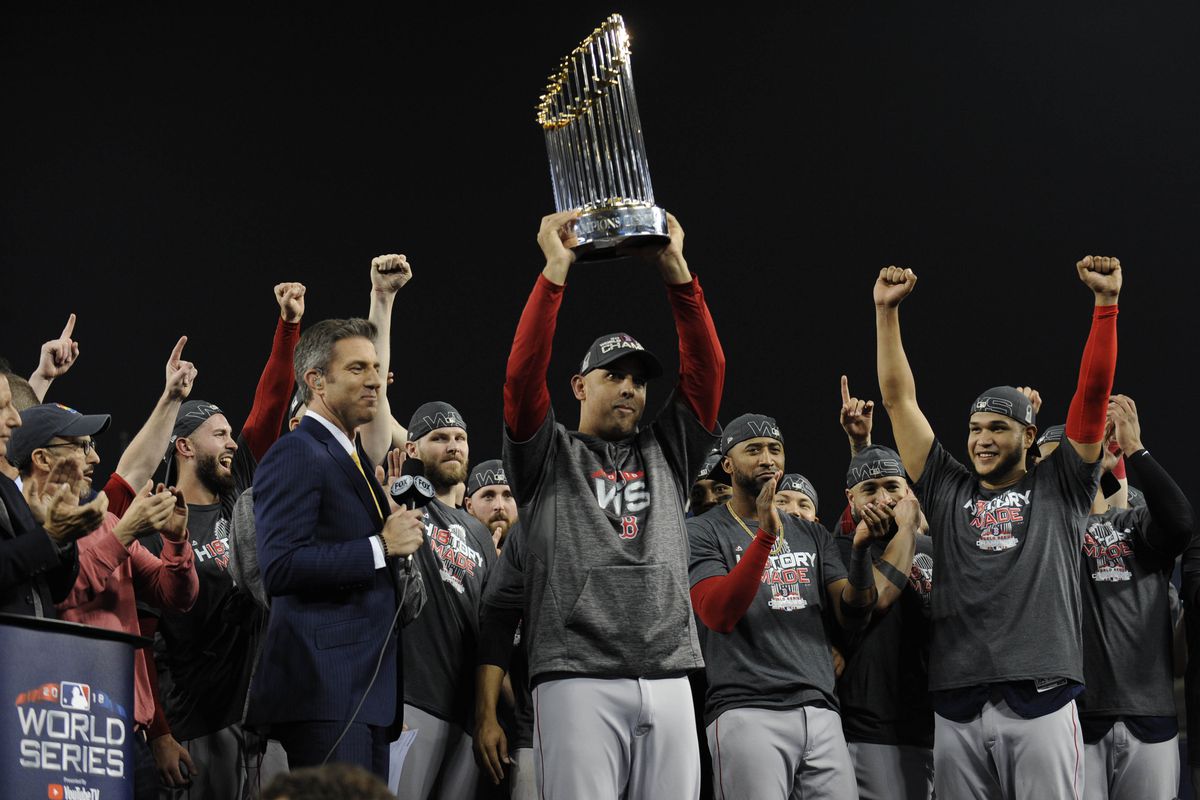 A little over a year ago the Boston Red Sox were in the World Series for the fourth time in 15 years. They’d soon add another banner to Fenway Park.

In the grand scheme of things, life has been pretty good for Red Sox Nation since the turn of the century. Numerous division titles as well as four World Championships have made being a fan in Boston pretty nice. Of course, there are stressful and downright miserable seasons but for the most part, life’s pretty good in Beantown.

Once the Curse was broken in 2004 it felt like winning became a way of life for the Red Sox. They’d tally on two more World Series titles in 2007 and 2013 while padding the record books with divisional championships. There could be more silverware on the shelves as Boston isn’t impervious to collapses and failure. Those seasons have been few and far though and are usually sandwiched between successful campaigns.

If you want to talk about success in Boston then the 2018 season for the Red Sox might as well be chapter one of the story. Freshman manager Alex Cora was the captain of the ship and instantly made a change to the squad. It wasn’t so much a change in staff or roster but in clubhouse culture. His jovial attitude combined with his passion for the game made this team a blast to watch night in and night out.

Cora won a World Series as a member of the Red Sox in 2007 and was an instant fan favorite as a manager. Boston’s 2018 was a year for the record books as they set a franchise record for victories, ending the season with a 108-54 record. They fell just eight wins short of tying the MLB record of 116 wins set by the 2001 Mariners.

The Sox would not just cruise through the regular season but the postseason felt like a breeze as well. They’d dispose of the Yankees in the ALDS 3-1, next they’d eliminate the Astros in the ALCS 4-1, and finally a meeting the Los Angeles Dodgers.

The Dodgers had become a mainstay in the World Series in recent years but had built a reputation for falling short with the lights shining bright. In 2018, they’d be running into a buzzsaw in the Red Sox that were firing on all cylinders. Boston would win their fourth World Series since 2004 in what would be another dominant series win.

Many of Boston’s stars played big roles in the playoff run as well as in the Fall Classic so you won’t be seeing their names here. Remember, we’ve been trying to look at those players that went above and beyond what the expectations of them were. Just as I did in the previous chapters, my eyes went right to a pitcher and a fielder.

You may think that my pitching choice would be someone like Nathan Eovaldi, Rick Porcello, or even David Price. Though each of those guys came through huge, their efforts for the Red Sox in the Series were well documented and heralded. When I looked at the pitching stats against the Dodgers one name jumped off the screen, Joe Kelly.

That’s right my friends, we’re talkin’ about ol’ Jim Buchanon! Kelly was traded to the Red Sox at the 2014 deadline and spent the next four and a half years earning mixed results. For every rough outing, there would be one with flashes of brilliance, and that would become his calling card. Something changed in the fall of 2018 though and he reached new heights in October.

During the Series, Kelly would toss six scoreless innings while giving up just four hits and striking out ten batters. He didn’t walk a single Dodger during the World Series and ended with a perfect ERA of 0.00. His fastball was electric and felt absolutely unhittable while he was able to keep LA guessing what was coming next.

I can only speak for myself, but I feel like most will remember his emotion during the championship run. Coming off the mound shouting like an absolute madman as the adrenaline was flowing through his veins.

The Joe Kelly Fight Club may not have been needed during the postseason but he brought that must-win attitude to every outing. He would leave Boston the following offseason, ironically, for the Dodgers after the Sox lowballed him in free agency. Something that the organization is becoming known for in recent times.

My other winner of the “Unsung Hero Award” for 2018 is third baseman, Eduardo Nunez. I will fully admit that I am not the biggest fan of Nunez as his erratic baserunning and spotty defense was migraine-inducing. However, his chances in the World Series were limited once Rafael Devers came onto the scene and wrestled the job away from him.

In Game One, the Red Sox and Dodgers went back and forth with neither team ready to give in. Boston had a tight 5-4 lead in the seventh inning when Cora pinch-hit Nunez for Devers with runners on base. It wouldn’t take long for Eduardo to reward AC for his gamble as he golfed a pitch into the Monster seats giving the Sox an 8-4 lead, which would be the final score.

Though Boston was winning when Nunie his that three-run bomb, it was his hit that gave them the final push to the finish line. With the way that the Dodgers were battling back that night, it was very possible that the Sox could’ve lost had it not been for that home run. He may not have had a major impact over the entire matchup, but his Game One homer allowed Boston to get to a 1-0 series lead.