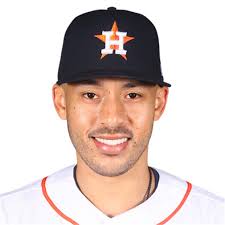 Carlos Correa has won one World Series Ring as the Houston Astros in the 2017 season.

Drafting to the Houston Astros

On June 8, 2015, the Astros promoted Carlos Correa to the major leagues.

He debuted in a 3–1 loss to the Chicago White Sox, going 1-for-4 with a RBI single off of Chris Sale.

However, on June 9, Correa stole his first career base and hit his first MLB home run off of Zach Duke.

Carlos Correa by stealing three bases in his ninth game, he became the second-youngest player to do so in a century, only trailing Rickey Henderson by 21 days.

Furthermore, Correa established a new franchise record for most hits during his first ten games by batting 14.

He went on to also break the franchise record for most hits through 15 career games with 20.

Also, Carlos Correa set a franchise record for most doubles during his first 20 games, batting 9.

Five home runs were also hit during this timeframe for a total of 14 extra-base hits, tied for the second-most since the 1993 MLB expansion.

Above all, Correa also tied two other players by reaching base safely in 18 of these games.

He won the American League’s Rookie of the Month award for June.

For May 2017, Correa was named the AL Player of the Month. He delivered a career-best five consecutive multiple-hit games from May 25–29.

Furthermore, he was selected to play in his first MLB All-Star Game, held at Marlins Park in Miami.

On July 18, it was revealed that he had suffered a torn ligament in his left thumb. He was ruled out for six to eight weeks

Carlos Correa went 3-for-5 in Game 5 including an RBI double and one of the five home runs by the Houston Astros helping them beat the Los Agneles Dodgers 13–12.

Above all, his effort helped setting the new record of most total home runs in a World Series.

This was the first World Series Ring won by Astros by winning the World Series in Game 7 giving them their first title in franchise history.

Also, this was the first World Series Ring won by Carlos Correa. Also the first ring won by the franchise.

Consider to be one the best designed World Series Ring in the history.

Creating the iconic “H” in the Astros logo are 11 custom-cut baguettes which represent the team’s 11 postseason wins.

The top of the ring is adorned with 101 diamonds, representing the number of regular season victories won by the Astros in 2017.

Connecting with the 11 custom-cut baguettes, the total diamond count reaches 112, the final number of wins the Astros achieved to become World Champions.

Completing the top of the ring are 56 round diamonds, which encircle the logo and represent the 56 years of Astros franchise history prior to earning a World Championship.

Buychampionrings has a full collection of World Series Rings for sale. check out their store.