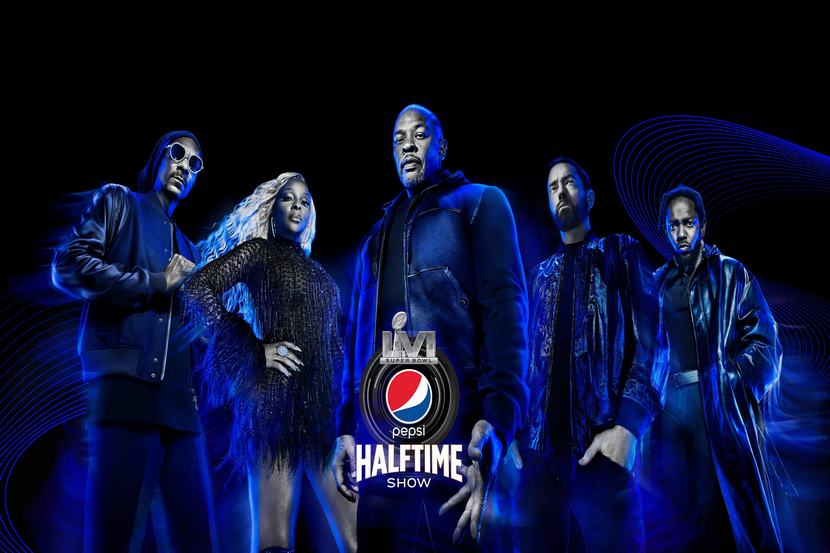 There are five performers set to take the stage at halftime of Super Bowl LVI between the Los Angeles Rams and Cincinnati Bengals. Eminem, Dr. Dre, Snoop Dogg, Kendrick Lamar and Mary J. Blige and are all scheduled to entertain between the action of the game’s biggest event of the season.

Collectively, the five performers have taken home 44 Grammy Awards (Snoop Dogg is the only one with none, despite 17 nominations). Eminem has 15 Grammys, Kendrick Lamar has taken home 13 Grammys, Mary J. Bilge has nine awards from 31 nominations and Dr. Dre has seven Grammys.

Here is a closer look at each artist, some of their accomplishments and what we can expect from them on Feb. 13.

Marshall Mathers, known as Eminem or Slim Shady, is a rapper, songwriter, producer and starred in “8 Mile,” a movie based on his life that won an Oscar for Best Original Song.

Eminem and Dr. Dre have a long history together, with Dre discovering Eminem after an early mixtape of his ended up in Dre’s hands.

Dr. Dre is known as a rapper, record producer, actor, entrepreneur and is the CEO of Aftermath Entertainment and Beats Electronics. He co-founded and co-owned Death Row Records.

Dr. Dre rose to fame in the 1990’s with the rap group N.W.A. and released his first solo album “The Chronic” in 1992. On top of his own music career, he helped launch the career of many — including Eminem and 50 Cent.

Dre has songs with Eminem, Snoop Dogg and Mary J. Blige, all of whom are set to perform during halftime. Dre has added two deaf rappers, Sean Forbes and Warren “WaWa” Snipe, to the halftime performance, marking the first time sign language interpreters will be included in the halftime show.

Buychampionrings has a full collection of Super Bowl Championship Rings for Sale. Click Here to Check out their store.

Snoop’s favorite football team is the Pittsburgh Steelers, though he has been seen rooting for and at stadiums of the Las Vegas Raiders, New England Patriots and more. The 50-year-old rapper first started under the name Snoop Doggy Dogg and the exposure of being on Dre’s debut album helped launch his solo career.

Kendrick Lamar, 34, is the youngest performer of the five to take the stage during the Super Bowl LVI halftime show. His mainstream debut came in 2012 with his album “Good Kid, M.A.A.D City.” The rapper, songwriter and record producer is from Compton, Calif. and is a Rams fan.

This will not be Lamar’s first halftime show at a football game. He performed at the College Football Playoff National Championship Game between the Alabama Crimson Tide and Georgia Bulldogs.

Mary J. Blige has 41 singles that have hit the Billboard Top 100 charts. She was signed to Uptown Records in 1991 and has since dominated the hip hop world.

The 51-year-old singer has also made an impact in film and in 2017 became the first person nominated for an Academy Award in acting and songwriting in the same year (the film was “Mudbound.”)

For someone with the discography and level of popularity as Mary J., narrowing down a performance to a few songs or less will likely be difficult.