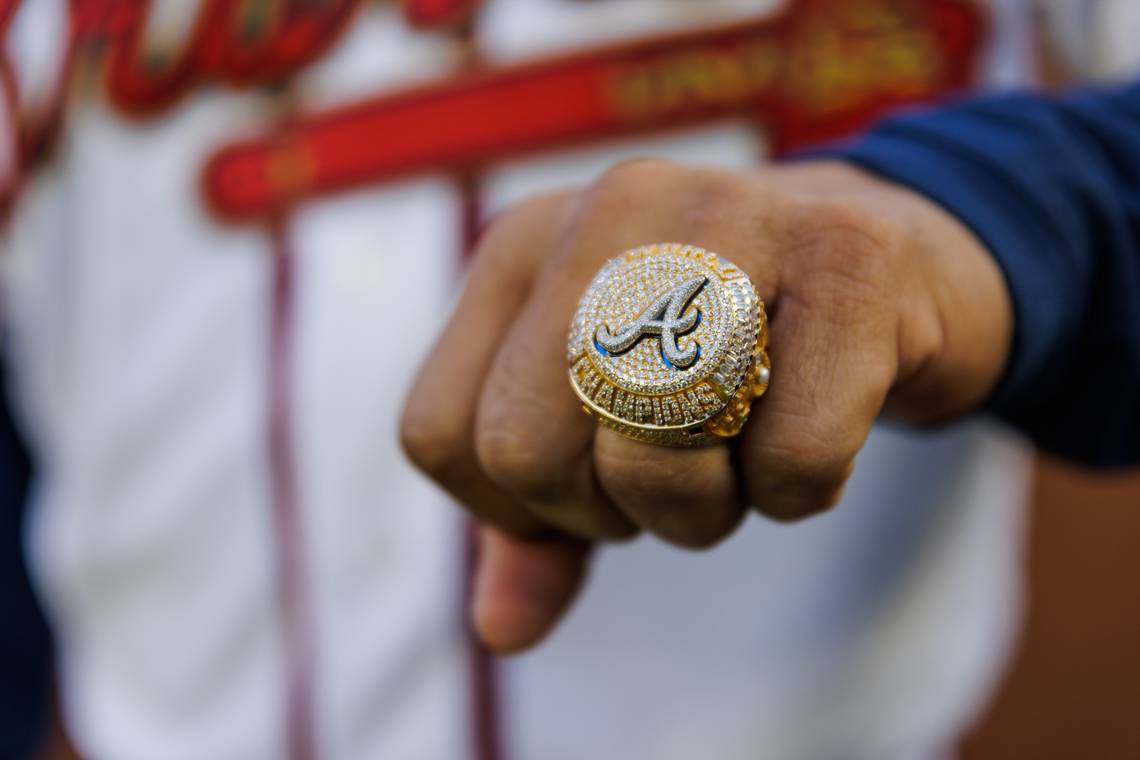 The name Braves which was first used in 1912, originated from a term for a Native American warrior. They are nicknamed ‘the Bravos’, and often referred to as ‘America’s Team’ in reference to the team’s games being broadcast nationally on TBS from the 1970s until 2007, giving the team a nationwide fan base.

The Braves was named from the 1966 till present. From 1991 to 2005, the Atlanta Braves were one of the most successful franchise in baseball. Winning an unprecedented 14 consecutive division titles and producing one of the greatest pitching rotation in the history of MLB. Most notably, the Atlanta Braves pitchers consist of Greg Maddux, John Smoltz, Tom Glavine and Steve Avery.

Since the Braves debut in the National League in 1876, the franchise has won an MLB record of 21 divisional titles, 18 National League pennants and four World Series ring.

The Atlanta Braves are the only MLB franchise to have won the World Series ring in three different home cities. At the end of the 2021 season, the Atlanta Braves overall win-loss record is 10820 – 10757.

Lets take a look at the years that the Atlanta Braves won their World Series ring.

In the 1914 World Series, the Boston Braves, currently known as the Atlanta Braves, beat the Philadelphia Athletics in a four-game sweep.

A contender for greatest upset of all time, the “Miracle Braves” were in last place on July 4th, then roared on to win the National League pennant by 10-1/2 games and sweep the stunned Athletics. The Braves’ relatively unknown starting trio of pitchers, who would post a combined career record of 285-245, outperformed the Athletics vaunted rotation (929-654 career record) in all 4 games. Hank Gowdy hit .545 (6-11) with 5 extra-base hits and also drew 5 walks for Boston in the series, and was the difference maker in Games 1 and 3.

Adding to their supposed disadvantages, the Braves arguably lacked a notable home-field advantage. They had abandoned their 43-year-old home field South End Grounds in late summer, choosing to rent from the Boston Red Sox at Fenway Park while awaiting construction of Braves Field. Thus their home games in this Series were at Fenway.

This was the first four-game sweep in World Series history. The Cubs had defeated the Tigers 4 games to 0 in 1907, but Game 1 had ended in a tie before the Cubs won the next four in a row.

In some circles, it was alleged that the A’s were irritated at the penny-pinching ways of their manager/owner Connie Mack, and did not play hard. Hall of Famer’s Chief Bender and Eddie Plank would jump to the rival Federal League for the 1915 season. Mack unloaded most of his other high-priced stars soon after and, within two years, the A’s achieved the worst winning percentage since 1900 (even worse than the 1962 New York Mets or the 2003 Detroit Tigers).

There were also rumors that this series was fixed, but unlike the 1919 World Series [citation needed], if it was done, it was done subtly, and the fixers were not found out.

The 1957 World Series featured the defending champion New York Yankees of the American League playing against the Milwaukee Braves, currently known as the Atlanta Braves, of the National League. After finishing just one game behind the N.L. Champion Brooklyn Dodgers in 1956, the Braves came back in 1957 to win their first pennant since moving from Boston in 1953. The Braves won the Series in seven games, behind Lew Burdette’s three complete game victories. The Braves would be the only team besides the Yankees, Dodgers, or Giants to win a World Series title in the 1950s.

The Yankees had home field advantage in the series. Games 1, 2, 6, and 7 were played at Yankee Stadium, while Milwaukee County Stadium hosted Games 3, 4, and 5. This was the first time since 1946 that the Series included scheduled off days after Games 2 and 5.

Of the previous ten World Series, the Yankees had participated in eight of them and won seven. This was also the first World Series since 1948 that a team from New York did not win.

This is the first of four Yankees-Braves matchups, and the only Series that was won by the Braves; they lost in 1958, 1996 and 1999, with the last two instances occurring with the Braves based in Atlanta.

Hank Aaron led all regulars with a .393 average and 11 hits, including a triple, three home runs and seven RBI.

The 1995 World Series was the championship series of Major League Baseball’s (MLB) 1995 season. The 91st edition of the World Series, it was a best-of-seven playoff played between the National League (NL) champion Atlanta Braves and the American League (AL) champion Cleveland Indians. The Braves won in six games to capture their third World Series championship in franchise history (along with 1914 in Boston and 1957 in Milwaukee), making them the first team to win at least one crown in three different cities. This was also Cleveland’s first Series appearance in 41 years and marked the resumption of the Fall Classic after the previous year’s Series was canceled due to a players’ strike.

The World Series was also remarkable in that five of the six games were won by one run, including the clinching sixth game, a 1–0 combined one-hitter by Braves Tom Glavine and Mark Wohlers.

This was the first time since the LCS changed to a best-of-seven format that a winner of a LCS via a sweep has gone on to win the World Series. It has since been repeated in 2019 by the Washington Nationals.

The 2021 World Series was the championship series of Major League Baseball’s (MLB) 2021 season. The 117th World Series was a best-of-seven playoff between the National League (NL) champion Braves and the American League (AL) champion Houston Astros. The series began on October 26 and concluded on November 2. The Atlanta Braves won the series four games to two. It was their fourth World Series title in franchise history, their first since 1995, and their second in Atlanta.

The Houston Astros had home-field advantage due to their better regular-season record than that of the Braves. The teams split the first two games, which were played at Minute Maid Park in Houston, and the Braves won Games 3 and 4 at Truist Park in Atlanta. The Astros won Game 5, returning the series to Houston. The Atlanta Braves won Game 6 to win the World Series. Jorge Soler was awarded the World Series Most Valuable Player Award after batting .300 in the series with home runs in three of the Braves’ victories, each time giving them a lead they would never surrender. This is the fourth Atlanta Braves World Series ring won by the franchise.

The Braves 2021 season was an undeniable success, and they achieved the greatest title in baseball – World Series Champions. This feat is honored through a spectacular World Series ring, rich in artistic storytelling and jewelry engineering. The 2021 Atlanta Braves World Series Ring is a true piece of hand-crafted excellence created in 14-karat yellow gold with 18.71-karat white gold accents with diamonds and genuine rubies that make this ring worthy of World Champions.

The 2021 Atlanta Braves world series ring top features the Atlanta Braves “A” logo, created in contrasting 18.71-karat white gold paying homage to the founding of the franchise in the year 1871. An astounding 150 diamonds are intricately, pavé-set within the “A” honoring the incredible 150 years of franchise history. A blue stone can be seen beneath the logo, creating a subtle blue outline and surrounding the logo are an additional 193 brilliant diamonds.

The words “WORLD CHAMPIONS” accents the top and bottom of the World Series ring, set expertly with 113 diamonds. Adoring the left and right sides of the ring are two rows of 11 emerald-cut diamonds; when combined there are a total of 44 emerald-cut diamonds. These 44 diamonds celebrate Braves legend and one of the greatest baseball players to ever take the field, Hank Aaron. Completing the ring top are 4 princess-cut rubies, set in the four corners of the ring top representing the 4 World Series victories achieved by the Atlanta Braves.